Warden’s Blog…February ’22 (from a wet and windy notebook!)

February is always busy on the Commons, as we race to get our clearance work finished before the birds start nesting and this year is definitely no exception.

It started with a good day for our volunteers on Tunbridge Wells Common, clearing scrub and bramble from our oldest heather area above the Victoria Grove, popping birch seedlings from the heather regeneration site below the Victoria Grove and carrying out a major litter-pick across the whole Common. 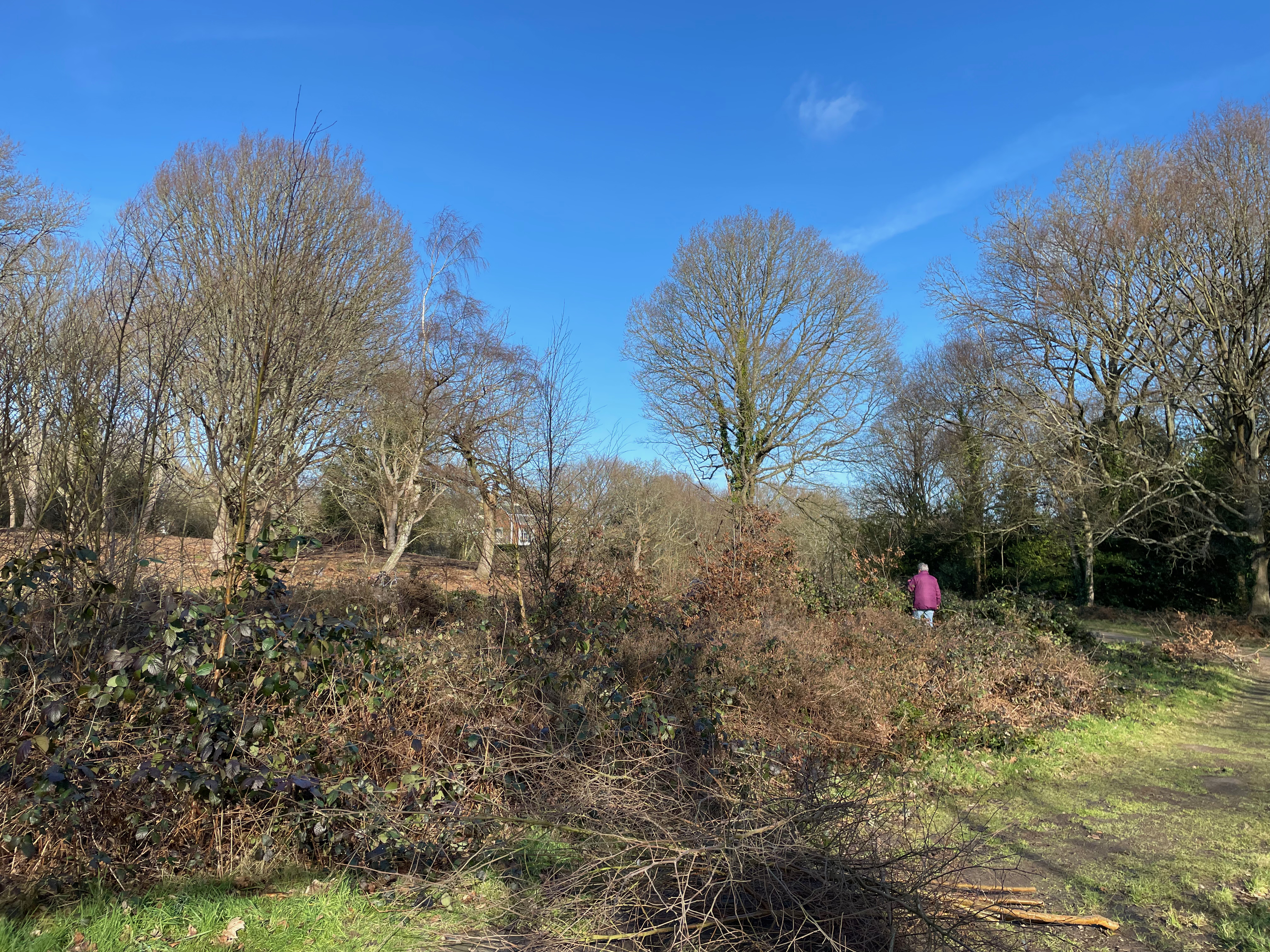 Volunteers tackling the scrub and bramble.

Then we commenced scraping much of the mulch left on last year’s two holly clearance sites near the Wellington Rocks, making a number of hibernacula for reptiles, small mammals and invertebrates, as well as hopefully exposing dormant seed from the original heathland vegetation. 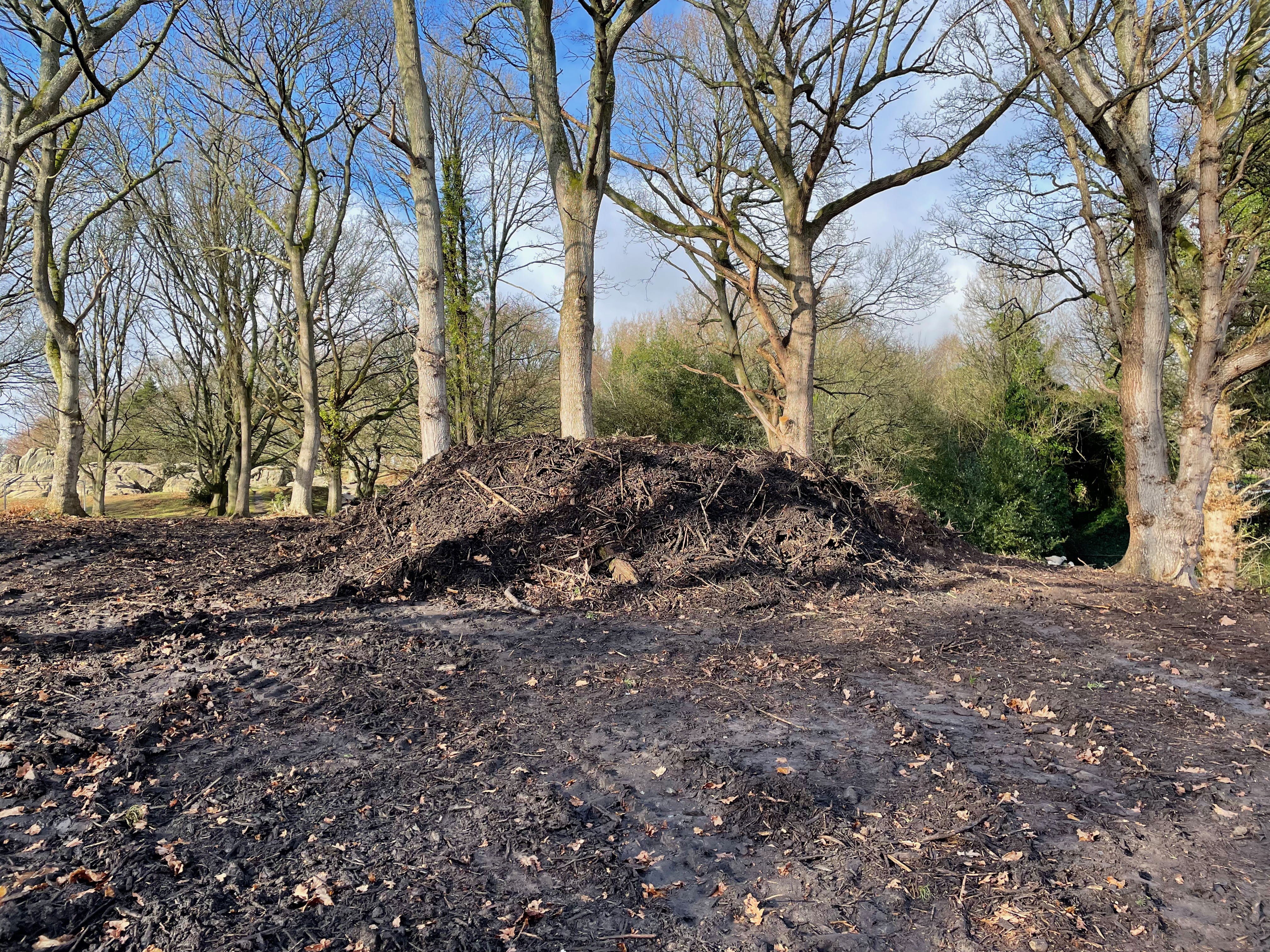 We also cut back the remains of the old, senescent, gorse hedge that used to run round the edge of the woodland between the Rocks and the Victoria Grove, to allow it to re-generate from the roots. Whilst we had the big machine there, we also filled some of the deep holes in the path behind the Rocks with sand dug from the nearby bank. This had the extra benefit of creating a new sandy scrape, which will no doubt give pleasure to the youngsters who play there, as well as providing more nesting opportunities for our rare solitary bees and wasps, for which the Commons are famous. 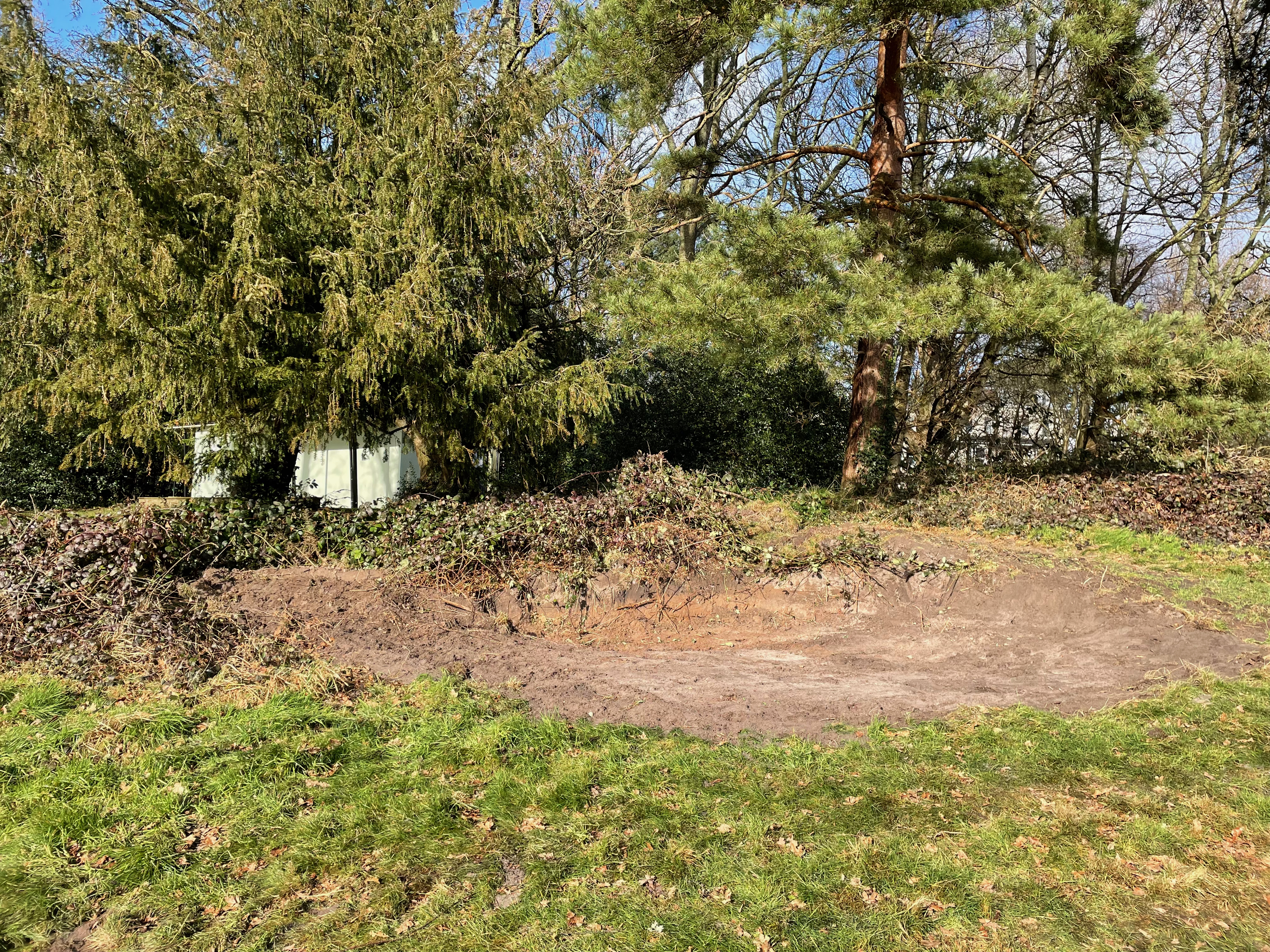 We then moved the machines to the steep bank between St Helena and Gibraltar Cottage, where we have cleared lots of bramble and scrub to re-expose some of the rock outcrops there. We have got as much done with the big machines as possible and now we are just waiting to finish the remaining clearance by hand. I anticipate that we will have completed this work by the end of February. It is quite a few years since we last gave this area any serious attention, so the impact of the current clearance has been quite dramatic.

Scrub clearance on the bank between St Helena and Gibraltar Cottage.

Our third big project was completed last week, with the clearance of another significant amount of holly scrub between the Racecourse and Hungershall Park Rd. The paths that we created through the dense holly a couple of years ago have now been connected through to the long-established clearance by the Racecourse. This has flooded the new paths with light, so I hope to see signs of regeneration of the herb layer as we go into Spring. We will be putting in a new culvert in the ditch next to the Racecourse in the coming weeks to improve access to this area.

Gemma and I have recently conducted walks on Tunbridge Wells Common with the short-listed candidates for my replacement when I retire later this year. We have some excellent applicants, which makes me feel a bit easier about handing responsibility on to someone else, although I must admit, it is all a bit disconcerting! 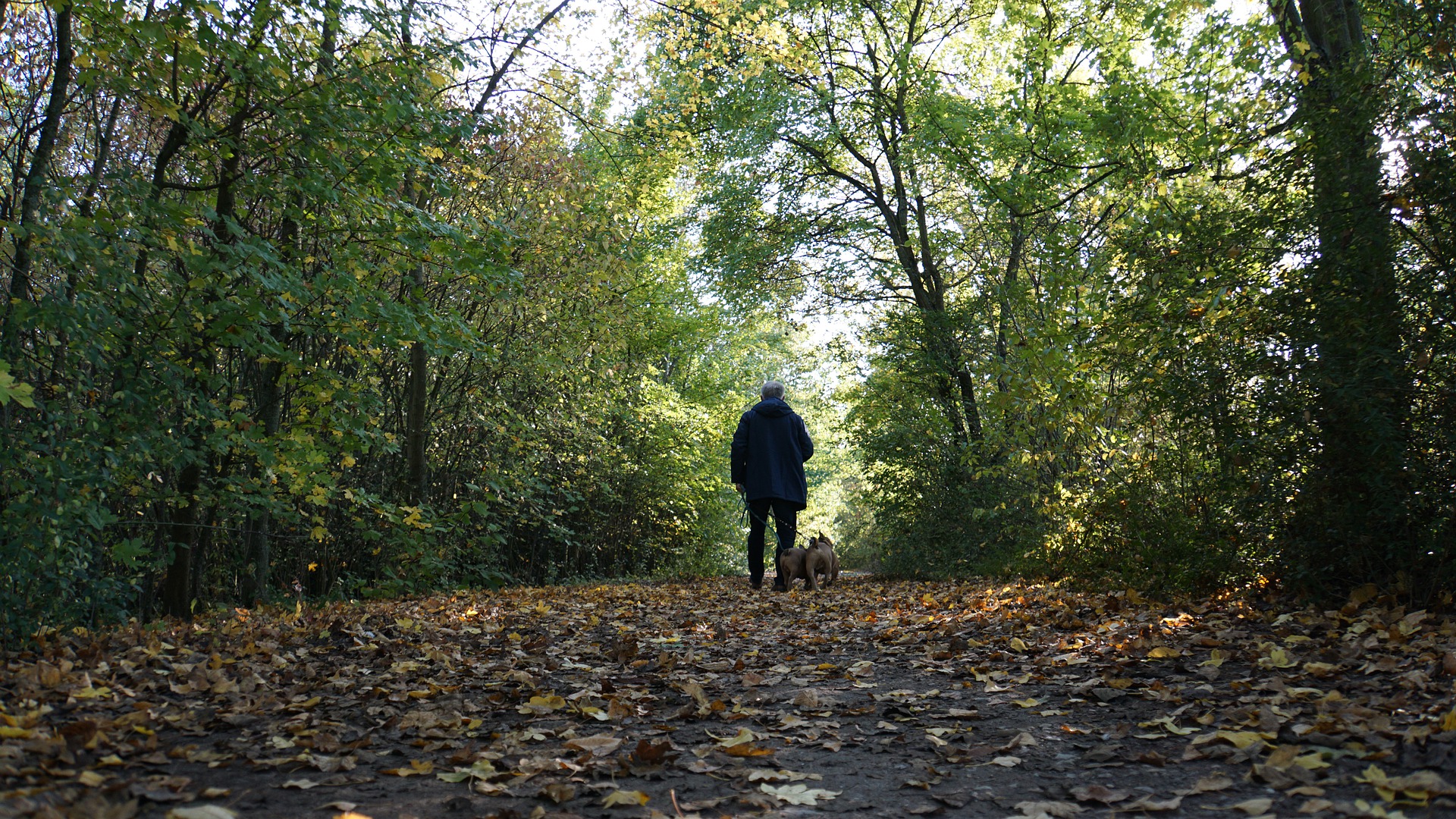 On top of all this, Storm Eunice has just passed through; it was quite impressive. I can’t remember anything that fierce since 1987, although mercifully it passed by quite quickly. The Commons did not suffer too much, mainly birch trees that came down on a few paths, we had it mostly cleared by Saturday afternoon. The exception of course was the big, triple stemmed oak near Brighton Lake that many of you will have seen. One stem came down partly across the A26, one stem fell back into the Common and lodged into adjacent tree tops and one remains standing at the time of writing this, although it should be being taken down in the next couple of days. It is now clear that the base of this tree and its roots had been decaying for some time, although there was no visual evidence to suggest anything was amiss. Thank goodness the ground wasn’t saturated as it was in 1987, things might have been a lot worse. 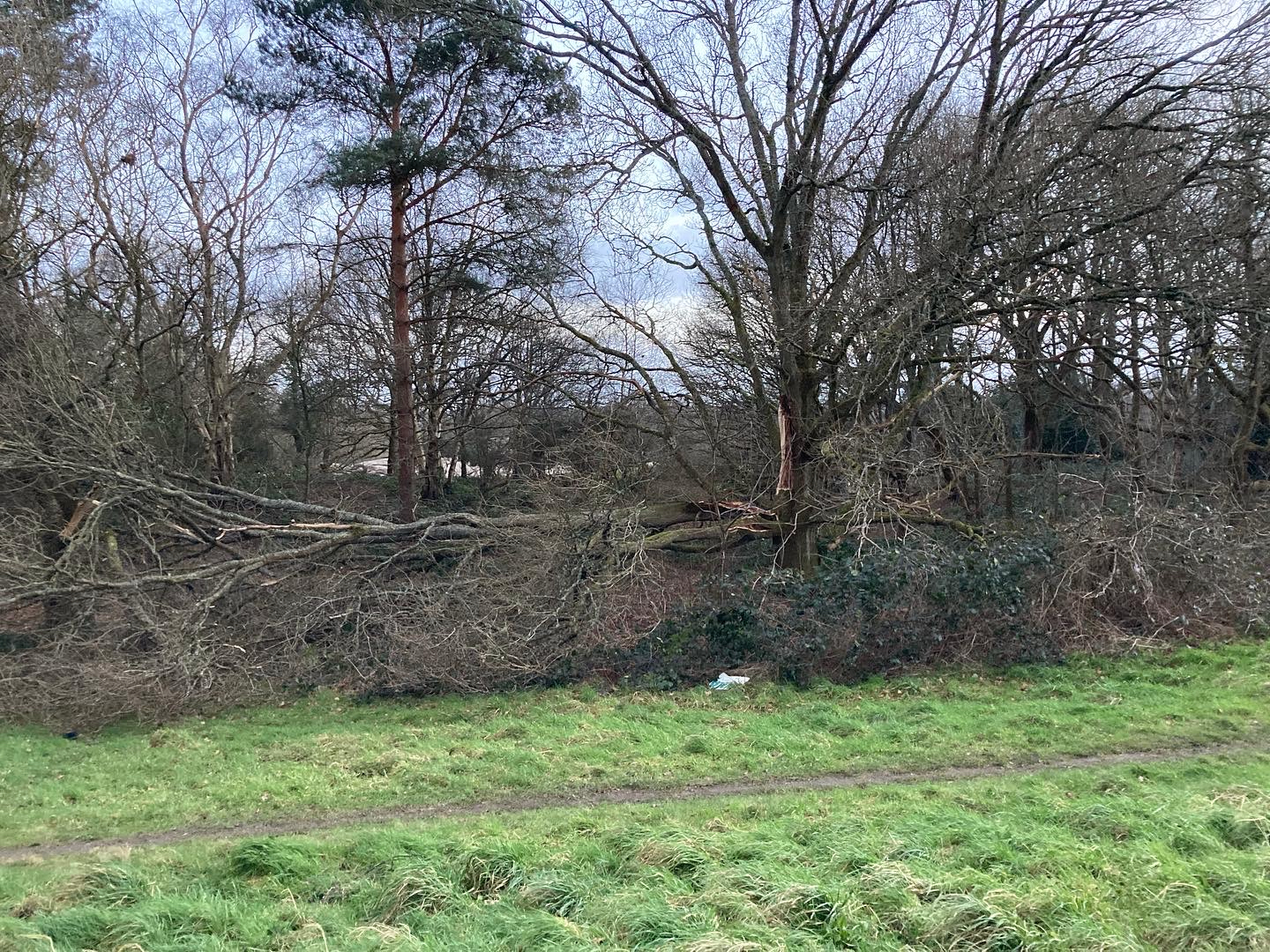